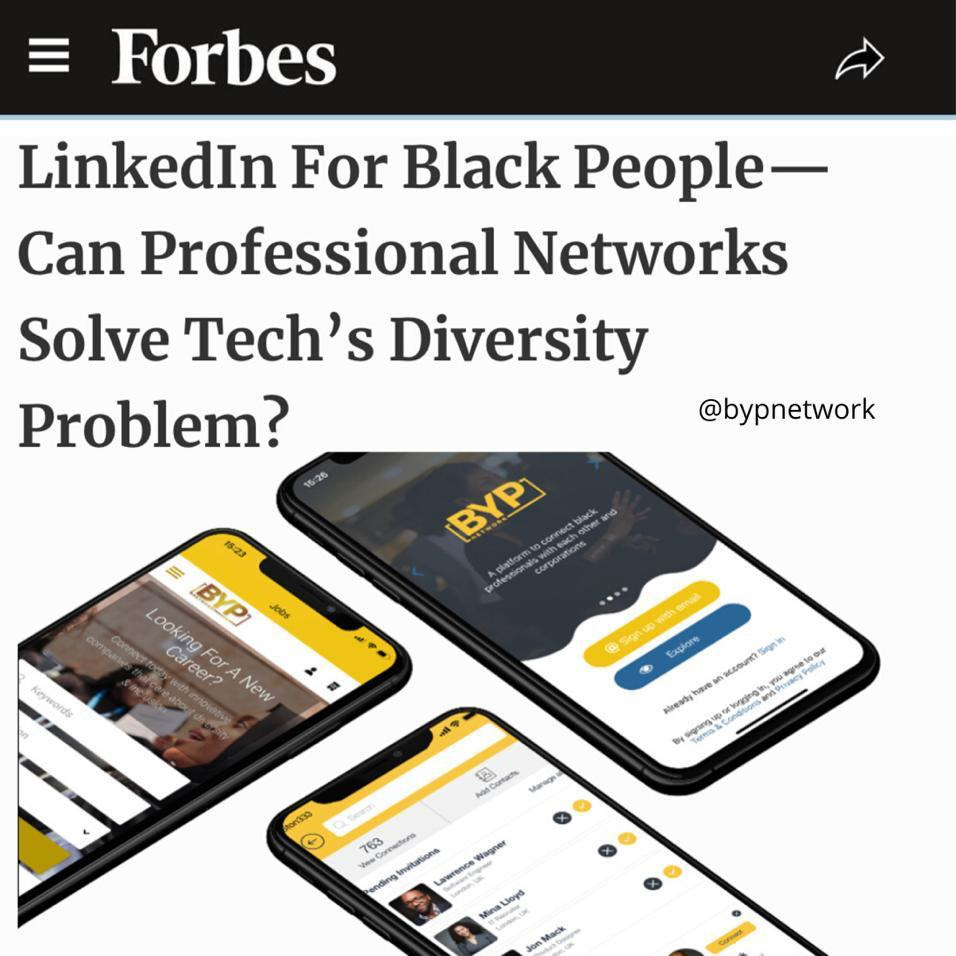 At the largest tech companies, communities of colour are notably absent. Professional networks akin to LinkedIn are setting out to solve tech’s long-standing diversity problem, starting with its most underrepresented group.

Although 13% of the U.S. population is black, according to the U.S. Census, tech companies have disproportionately low numbers of black employees—although blacks hold, proportionally, only a slightly lower number of degrees in computer science and engineering as other groups in the U.S.

The latest annual diversity reports for all major tech companies indicate that white, Asian and male employees were overrepresented, and this is exacerbated in leadership positions. At Microsoft, 4.5% of employees are black with most of them working in retail roles, rather than technical ones. Blacks make up 3.8% of the employees at Facebook, but when broken down to technical roles, that figure is reduced by more than half,  to 1.5%. Google’s numbers are slightly worse, with a mere 3.3% of the company’s workforce being black and only 2.6% of leadership roles filled by black people. At Amazon, 24.5% of its U.S. employees are black, according to its 2018 diversity report, but only 7.2% of the company’s black employees hold leadership positions.  And at Apple, 9% of employees are black, with 6% in technical roles and 3% holding leadership positions. Overall, non-black Hispanic people fare slightly better than blacks, but not by much.

Now, as tech companies large and small create initiatives aimed at achieving a workforce that looks more like the communities they serve or hope to reach, professional networking platforms, are stepping in to fill this gap.

“Companies say they can’t find diverse talent or it doesn’t exist, but we’ve proven to them that it does exist and that they’re not looking hard enough,” says Kike Oniwinde, founder of the Black Young Professional (BYP) Network.

“The app is open to all people of colour, but we market to black professionals,” says Oniwinde. “We do that because we know the black community, we understand our struggles are different from others and that we need to come together to help each other. And a lot of corporations are starting to understand this.”

The struggle to gain access to companies that have historically underemployed people of colour is difficult even for blacks who have graduated from Ivy League colleges.

“I disagree with the notion that because you go to a certain school that all of a sudden you have access,” says Porter Braswell, cofounder of Jopwell, a career and networking platform that helps companies recruit candidates of colour. The former Goldman Sachs analyst and Yale alum say that prestigious credentials don’t hold much weight once a candidate is at a company. “Going to an elite university—does that help? Yes, because you have that on your resume as a point of reference for an employer, to combat any potential unconscious bias,” he says, but adds: “The challenge with being a person of colour, when you start at a company, concerning retention and inclusion it’s way more nuanced than, ‘You went to a good school, so you’re all set.’”

Black job-seekers who do get hired by tech companies often find that their employers lack the tools to measure whether the workplace is equitable and inclusive.

“We’re just beginning to have conversations of how to translate inclusion into metrics, and we’re not there yet,” says Karl Reid, executive director of the National Society of Black Engineers (NSBE). “I applaud the tech industry for recording their diversity numbers, but I’d ask that they look at equity numbers as well. The gold standard is inclusion. Do people feel they can bring their full selves to the workplace?”

NSBE and Black Data Processing Associates (BDPA), both founded in 1975, are among the oldest U.S. black professional networks for STEM fields. They offer career development, recruiting and mentorship. NSBE is the larger of the two and begins working with black students as early as the third grade, continuing up through the C-suite.

In 1975, it’s inaugural year, NSBE increased the graduation rate among black engineering students at Purdue University by 40%. For the past two decades, blacks have received around 10% of all computer science degrees. NSBE hopes to increase these numbers and has grown to 25,000 members operating 625 chapters globally, with an annual operating budget of $15 million.

Terry Morris, national president of BDPA, sees a place for both legacy career networks and digital-first platforms. “There’s no silver bullet. It’s very much going to be a multidimensional approach to move the dial, acknowledging that the pipeline isn’t producing at the rate that the market requires,” he says. “You have to take what you’ve got and made it better as fast as you can.”

One of the latest entrants into the networking field is Valence, which aims to create both economic and social progress among black professionals by leveraging connections.

“Your situation may feel different because of the colour of your skin, which is a reality that some people don’t want to face,” says Kobie Fuller, Valence co-founder and a general partner at early-stage investment technology venture fund Upfront Ventures. ”If we can have an open and honest dialogue in a professional setting, that’s powerful. And people want it.”

Connecting over the shared black experience, particularly within STEM, venture capital, financial services and other industries where blacks are underrepresented could lead to increased representation within those industries.

“I realized that if I were to create a centralized database of black talent, that’s not only valuable for hiring managers and folks outside the community, it’s incredibly valuable for the community itself,” Fuller says. “We’re in these silos and it’s hard for us to find one another.”

Each of the networks offers features that are intended to get its members in front of companies and can be a starting point for companies looking to achieve a more diverse, equitable and inclusive workforce, which has been linked to better financial performance. The incentive to diversify exists, as does the talent. What remains is how to get there.

“Many people naturally have a network that mirrors their background and hasn’t spent the time to intentionally create a diverse set of professional connections,” says Fuller. “You can beat those people up and say, ‘You need to try harder or you can create a bridge among hiring managers, funding sources and this talent pool.”

This article was written by Forbes contributor, Monica Melton